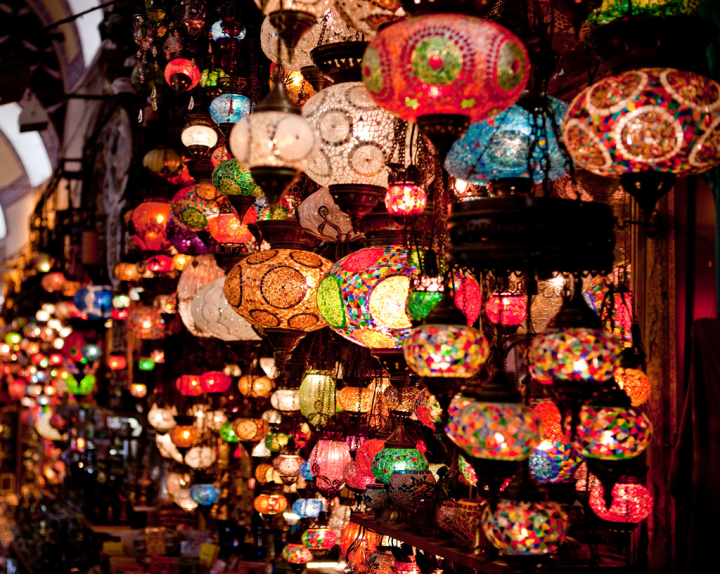 The first of many cool things about this city is that it is divided in two by the Bosporus Strait, which is a body of water that runs right through the middle of it. You might be thinking that this isn’t very interesting because pretty much every major city has a river, lake, or some other body of water nearby (the Seine for Paris, the Thames for London, Lake Michigan for Chicago, etc.) BUT the cool part is that the west bank is in Europe and the east bank is in Asia. So, if you visit Istanbul, you can check two continents off your list. That’s pretty cool.

So I stayed on the Asia-side and took the ferry over to the other side for my day of sight-seeing since that’s where the Old Town is. But if that’s what you’re there to see, you might as well cross the bridge and put a toe into Asia (just to say you did). 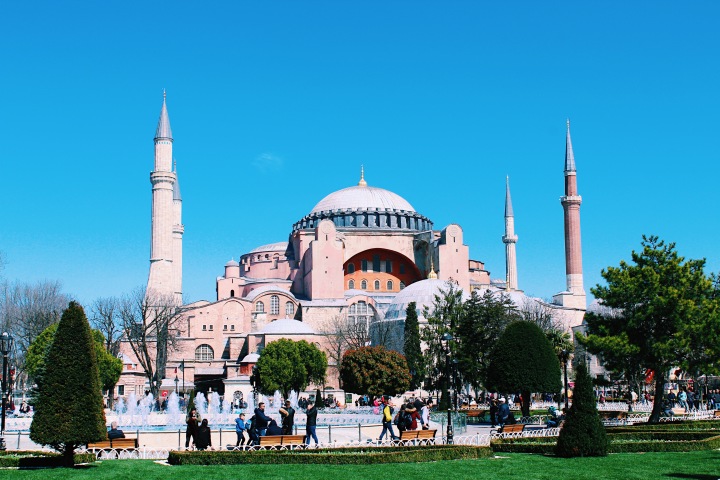 Obviously, this is first on my list because it’s first on every list and should be first on yours. This is the building that pops into most heads when Istanbul comes to mind. It is a beautiful building inside and out, but what makes it amazing is the history. It was originally constructed to be a Greek Orthodox church in 537 AD and acted as the seat of the Patriarch of Constantinople, but was later converted into an Ottoman mosque in 1453, which it remained until it was secularized and opened as a museum in 1935. The interior walls are covered in religious mosaics and lit by ancient chandeliers. The outside has a classic silhouette featuring a large dome and four minarets, which were an Ottoman addition.

The outside is also special because it faces a large courtyard with a fountain called Sultanahmet Square, on the other side of which is the Blue Mosque. 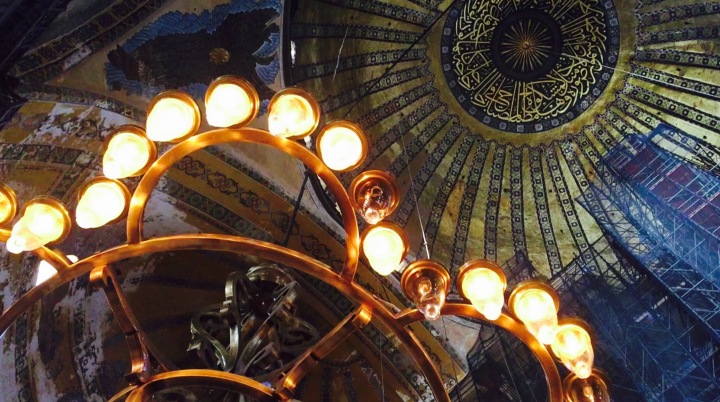 I loved standing just standing in the square between these two iconic buildings. I could just feel all of the history that I was in the midst of (even though I was also in the midst of a ton of tourists).

This one gets its name from the blue tiles surrounding the walls of the interior design, which is why you must see the inside. From the outside, seeing the dome and minarets mirrored with those of the Hagia Sophia might make you think the buildings are similar, but they honestly couldn’t be more different. The Hagia Sophia is an amazing piece of history, but the Blue Mosque is living, breathing history because it is still in use today. 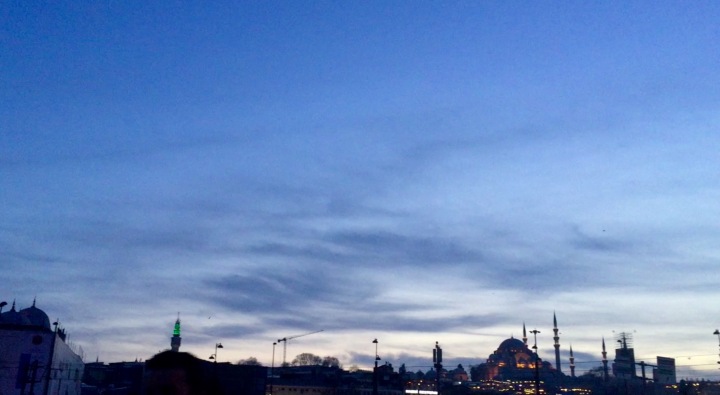 In order to go inside, you have to wait until they are between prayers, so go about a half hour after hearing the call to prayer. The second guideline is that you must be dressed appropriately, meaning girls have to cover their head with a scarf and cannot be wearing anything form-fitting, including pants (they’re trying to make people forget you have legs). I had a scarf, but my coat wasn’t long enough, so they provided me with a long, blue skirt that is basically made of scrubs material to put on over my pants. Guys simply have to take off their shoes because that’s just how the world works. SO, once you’re dressed in your Sunday best (no hair, no legs, no shoes), you can go inside. And it is so worth the wardrobe change.

Just walking through the Grand Bazaar is such a cool experience because there are vibrant colors and enticing smells everywhere, but I would also recommend haggling with some of the vendors to buy a souvenir or two. I got a blue hand-painted tile that lives on my coffee table and a ring that I wear almost every day. They’ve got good stuff. And the Turkish Lira is about 28 cents on the dollar, so you end up getting a pretty good deal.

The vendors are there to make a profit, but haggling is part of it, so don’t be afraid to try! Like my dad always says, they won’t sell it to you unless they’re making money. Most of them are also extremely nice and conversational. One of them taught me the only Turkish phrase I know: Teşekkür ederim, which means “I thank you.” He said to just think of saying “tea, sugar, dream” since it is pronounced tee-shah-kir-a-deer-um. Now you’ve got a phrase too!

Right by the Grand Bazaar, you will run into the Spice Market, which is definitely worth walking through. Being from Texas, I love spices of all kinds, but even if you like your food bland as can be, the colorful displays are so fun to see! 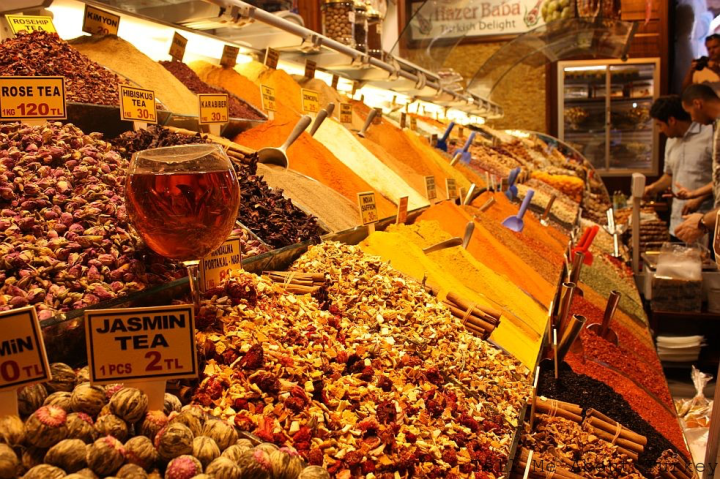 So this is another old, beautiful building. I’m working under the assumption that since you’re traveling you have interest in these sorts of things, but feel free to scroll if not. This one is cool because the palace was constructed by Sultan Mehmed the Conqueror in 1460 and now houses some pretty interesting exhibits. It’s famous for the Harem, but I didn’t see it because I had a time/money budget and it is a separate ticket. But other than that, the palace is a collection of beautiful buildings surrounding a large, open-air courtyard with a lot of greenery. 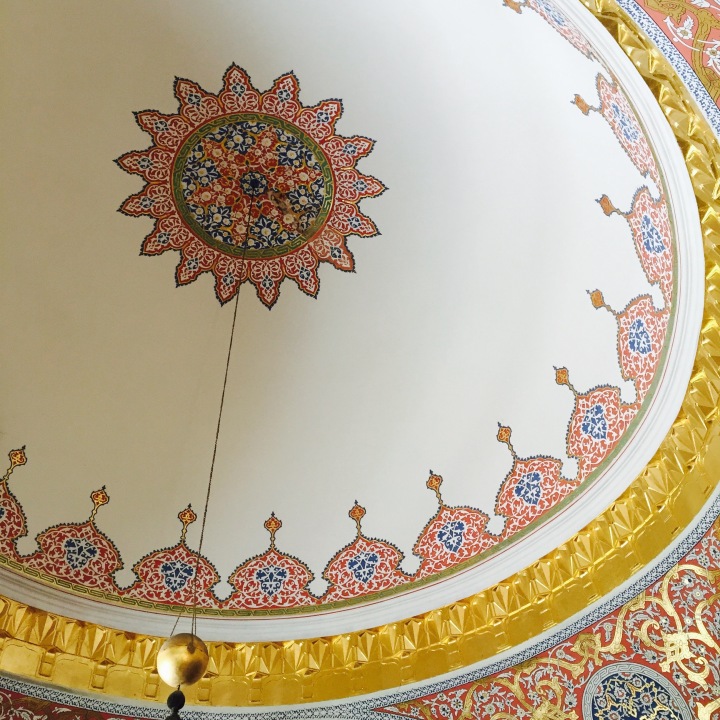 There’s a lot of beautiful tile-work inside (which you’ve probably noticed is a common theme) and a lot of it is blue (another theme). They also have some unique relics, including hair from the Prophet’s beard. Not kidding. The Imperial Treasury had some beautiful pieces as well, but my favorite collection was actually the Arms and Weapons. This was unusual because all weapons look relatively the same to me. Swords are swords, guns are guns. But every shield, gun holster, and sword handle was artfully crafted with bright colors and designs. The Turks went to battle in style. 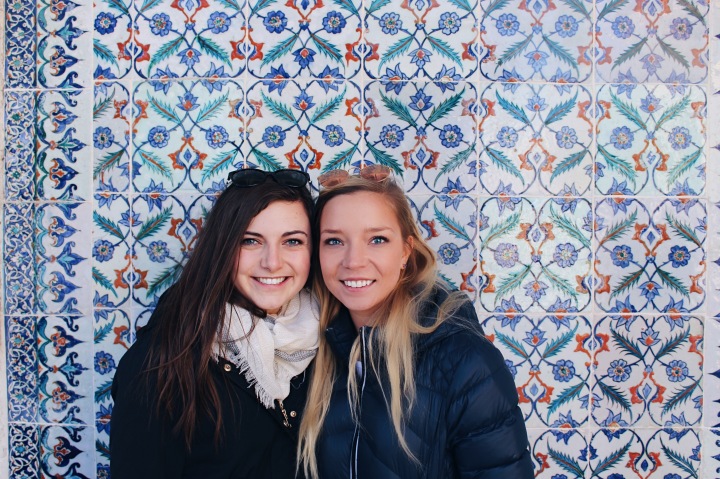 You don’t have to spend much time at this one, but it’s interesting to see. This is the largest of several hundred ancient cisterns that lie beneath the city. It was built during the reign of Byzantine Emperor Justinian I and basically consists of a large room filled with columns…336 columns to be exact, which is pretty impressive for the 6th century. The cistern can store 100,000 tons of water, but now there are just a few feet in the bottom with koi fish swimming around beneath the pathways that have been built so people can walk through. You can also learn a bit about column design and architecture (if you’re into that sort of thing).

This street, running from Taksim Square all the way to Tünel Mado, is one of the city’s main shopping streets and lets you see a more modern section of the historic town. One place I stopped was a bakery called Mado, where I had two of the best desserts of all time. The first one is a classic: baklava. This flaky pastry is worth the hype—you gotta get it. The other one is called künefe. If I tell you what’s in this, you have to promise that you’ll still try it because it is amazing. But it sounds gross. It’s a cheese-filled, shredded wheat dessert served with vanilla ice cream. Just trust me on this one.

Speaking of ice cream (which I usually am), be sure to stop at one of the ice cream stands on the street. The vendors will be wearing fun outfits topped with a stereotypical tassel hat and basically, they make fun of you for trying to buy their ice cream. Not with their words, but in the way they hand it to you…or don’t. It’s hard to explain, but it’s really funny to experience or just to watch some other poor tourist.

If you haven’t done it, this is the place to try. They have hookah everywhere. Honestly, just pick a cafe. It’s fun and casual and the thing to do to wind down after all the walking you’ve done (which will be A LOT).

I’m a big believer in the sentiment that trying the food is a big part of experiencing a culture (in case you haven’t picked up on that). Kebabs are sold all over and I would definitely make a stop to try one here. You should also get a cup of Turkish apple tea to sip—it’s a local fav. 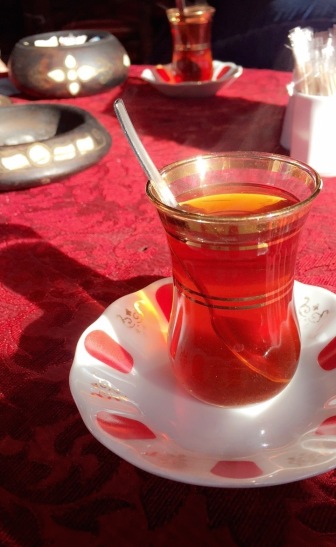 I only had a weekend here, but I was staying with my uncle who has lived in Istanbul for the past twenty years teaching, and having a guide fluent in Turkish was definitely helpful. I had to see a lot in a short amount of time, but however long you’re staying will be filled with a lot of amazing things! One of my favorite memories wasn’t even a sight, but a Turkish breakfast that my uncle made with different cheeses, olives, breads, jams, and (of course) coffee. It’s just a wonderfully unique culture to experience.

Enjoy this amazing city! And seriously, try the künefe.