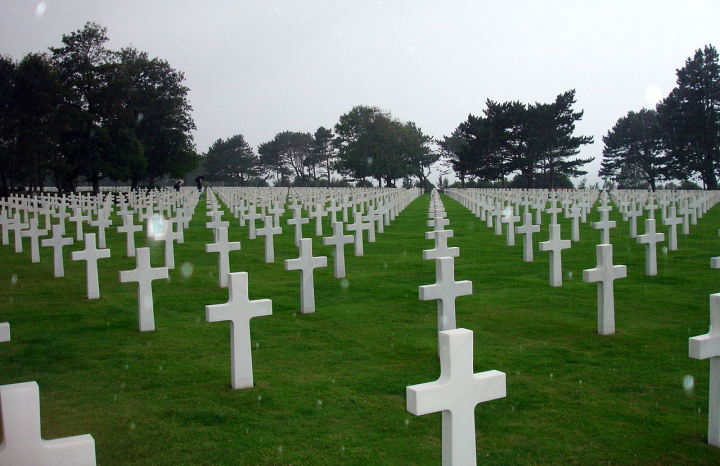 When I was studying in Paris, I took a day trip to Normandy to see the D-Day beaches, and I’m so glad I did. It was sobering, but also incredibly powerful.

If you’re coming from Paris, you’ll take the train to this little town or to Caen, a slightly larger town to the east. I loved getting the chance to walk its charming streets before my tour of the beaches.

Europe has no shortage of old, beautiful churches, but this one is worth seeing. It is a 13th-century Catholic church made memorable to me by its big, red front door.

This museum has pretty much one attraction, but sometimes that’s all you need. This medieval tapestry museum contains the world’s most celebrated embroidery: The 69-meter long story of William the Conqueror’s English invasion in 1066. I never really realized how long that was until I saw it…and imagined someone hand-stitching it.

This museum lies right next door to the cathedral and claims to be one of France’s most gorgeously presented provincial museums. The exquisite exhibitions cover everything from medieval art to paintings from the Renaissance to the 20th century. There is also some impossibly delicate local lace on display, which is truly beautiful to behold.

Baby, this is what you came for.

I went in February, so there actually weren’t any group tours available…which I didn’t realize until I got there. So after a bit of a scramble, I ended up booking a private tour. It was definitely more than I was hoping to pay, but it was one of the coolest experiences.

Make sure you get a tour that takes you to Pointe du Hoc, which is a promontory with a hundred-foot cliff overlooking the English Channel. It’s the highest point between Utah Beach to the west and Omaha Beach to the east. It gives you a really good idea of what the soldiers were facing and lets you see the Germans’ point of view from Nazi bunkers.

This will most likely be part of your tour, but make sure to stop here if it’s not. If you can, go at 4:00 when they have the daily flag ceremony. They lower the American flag while playing Taps. I can’t remember being more proud to be an American.

I actually saw this on a different trip years ago, but it’s another place you should definitely see if you’re in Bayeux. This is an island that has been the home to a monastery since the 8th century. It is an island, but you can drive there during low tide. Seeing the tide come in is pretty amazing, and the overall feel of this place is pretty magical.