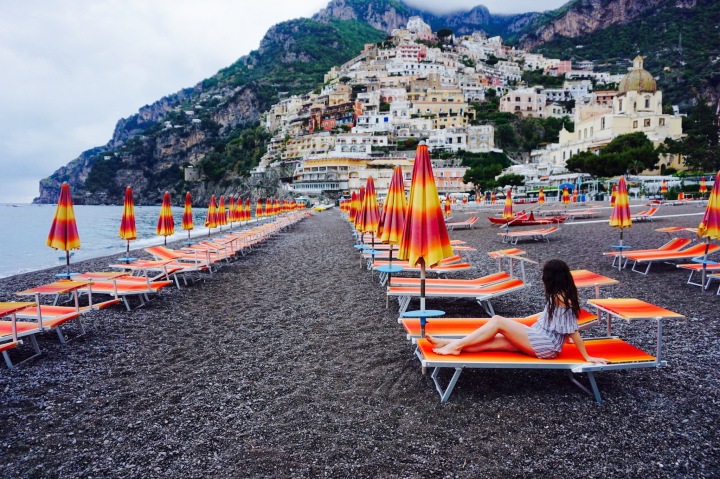 This little hillside on the Amalfi Coast should be at the top of your travel wish list. Steep, narrow streets lined with boutiques and cafes weave through the colorful, cliffside village and eventually lead down to a pebble beachfront dotted with iconic orange and yellow umbrellas. This is one of those places that you’ll never be ready to leave.

I’m not typically a huge fan of hostels, but this is one of the best places I have ever stayed. There is a large terrace with a beautiful view overlooking the water where breakfast is served to order every morning. I was traveling with a friend, but I also met so many fun people here, which made this trip one of my best. There is also a great little restaurant right across the street called Ristorante C’era una volta. They had amazing pappardelle and cheap wine, but the best part was the pizza that can be ordered for take-away and eaten anywhere you can find a gorgeous view…so anywhere.

The main beach in Positano is Marina Grande Beach. It’s the one in all of the classic pictures with the building-covered hillside and the bright orange and yellow umbrellas. You’ll also spot a dome clad in yellow, green, and blue majolica tiles, which is one of Positano’s most distinctive landmarks, the Church of Santa Maria Assunta.

You will definitely spend some time here, but it will almost always be crowded. One tip I’ll pass on is to go down to this beach really early one morning. I had an early flight and went down around 6:30am before I left…it was really cool to see it so peacefully empty before the little town wakes up. That’s also a really good time to snap some pictures.

If the crowds get to be too much, walk over to Fornillo Beach. It’s a smaller beach found just a bit further down the coast where sun worshippers looking for a more peaceful hideaway gather to find solitude by the sea. 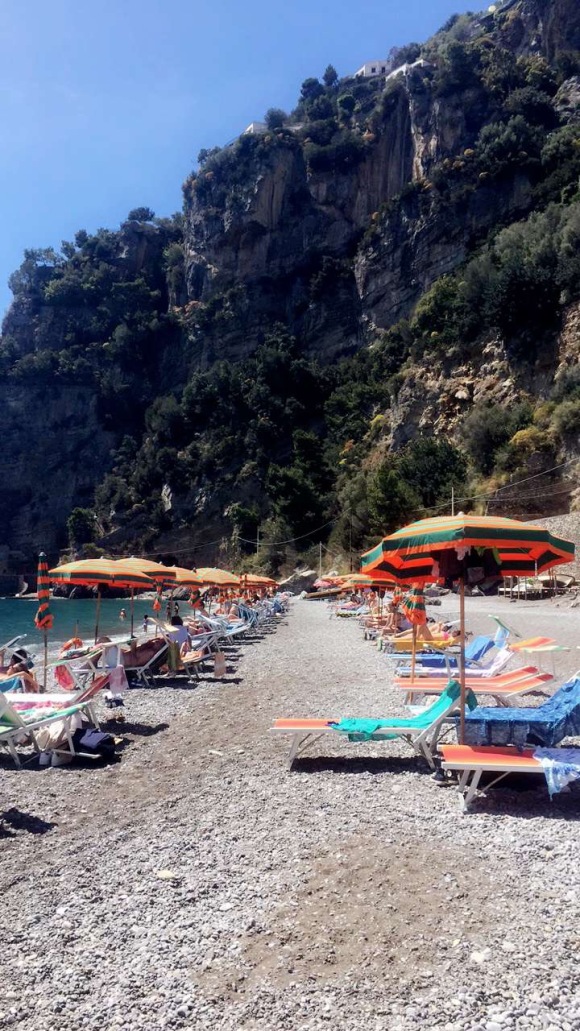 The Amalfi Coast is world-famous for their lemons, which is why you will find lemon trees dotting the entire coast. There are also shops everywhere selling anything lemon-themed you can think of. If you got it, flaunt it.

My favorite lemon was frozen and filled with gelato. There is something so much more fun about eating lemon sorbet out of an actual lemon! They carve out the insides and freeze the peel to act as a bowl. You can find them all over the place, and I definitely recommend getting one to satisfy the daily gelato craving you’re bound to experience while in Italy. But you should be having more than one gelato stop a day, just in case you were unaware. So this is just one to throw into the mix. 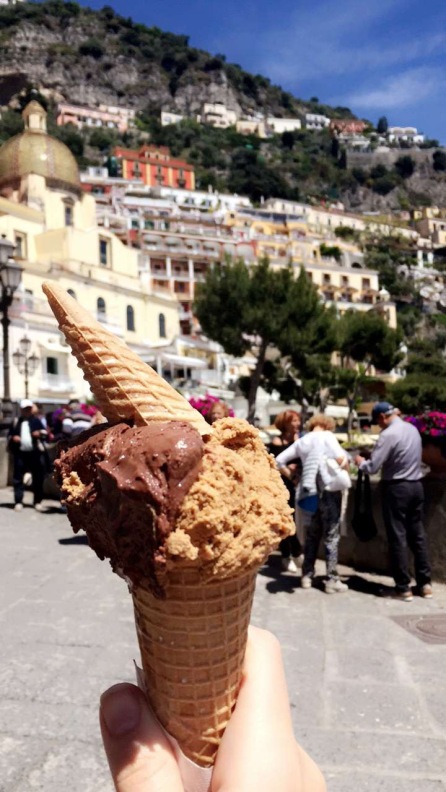 One of the perks of meeting cool people at my hostel was that we were able to form a group and split the cost of renting a private boat to take us out on the water! Little boat rental stands dot the main beach, so stop at one and check out what boats are available.

This was by far one of my favorite things on the trip. On our way down to the water, we stopped at a grocery store and a couple fruit stands to pick up fresh mozzarella, prosciutto, strawberries and some wine so could have a little picnic while we were out. Our boat also came with a few bottles of champagne because we weren’t quite spoiled enough.

We also asked our boat driver to take us somewhere for cliff jumping, so he drove over to a place near the coastline and pointed out where we needed to swim. After a quick dip in the freezing-but-beautiful blue water, I climbed up and jumped! So. Fun. Highly recommend.

Even if you’re not into heights, the views of the coastline from the water can’t be beat. It feels like a dream.

This little restaurant was where I ate my first meal in Positano. And it set the bar really high.

Sitting outside is definitely the way to go. You can gaze out at the endless blue, see the picturesque hillside cascading with buildings, and sip on your Aperol Spritz all at the same time. They are open all day at the Hotel Villa Gabrisa, but I went for lunch and don’t think it could’ve been better. The family who owns it has origins in farming and fishing, and they strive to share food the way that nature and the sea offer it. Everything is made fresh, including the pasta. The spaghetti is the best you’ll get anywhere and the seafood is amazing too. This is honestly where I would eat my last meal.

Whether you’re really into hiking or just say you’re into hiking to sound outdoorsy, you should hike this trail. You’ll get to admire one of the most striking panoramas out there. The path runs west to east and there are quite a few different starting points, but the best one just depends on where you’re staying. The path is doable all year round, but obviously, the weather varies. I would also suggest going with a guide because it’s a bit difficult getting there…but I’m also one of those GPS-dependent people, so take that with a grain of salt.

I’m not a big fan of clubs, but this one is built inside the cliffside inside a cave, which is pretty cool. It’s located right in between Positano and Amalfi. Besides the uniqueness of the venue, the rest seemed pretty standard to me. Darkness. Drinks. Dancing. Have fun!

I wish someone had told me how difficult it is to actually get to Positano before I went. It wouldn’t have changed my mind by any means, but a heads up would’ve been nice.

The closest airport is in Naples, so that’s where you’ll fly into unless you’re driving. Once you land, the easiest way to get to Positano is to take a shuttle bus that waits outside the airport to Sorrento, which is another little town on the coast. That’ll get you a stone’s throw from Positano. The shuttle to Sorrento will stop in at the train station there, which is where you’ll hop on another bus to get to Positano. The entire ordeal takes about 3-4 hours depending on the traffic, so just be warned.

If you have some time to kill in between shuttles, walk around this little town. It has some charms for sure and isn’t a bad place to be stuck for a bit.

Enjoy this amazing place! And then just don’t leave…trust me.