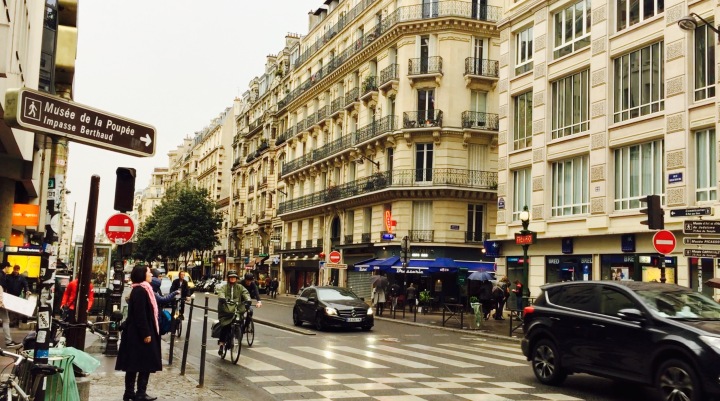 Paris is magical. I had the wonderful experience of living there for an entire semester and I loved every second. One of the books I read while riding around on the Metro was Paris to the Moon had a description of Paris that has stuck with me because it captures it so well:

“It is not an old or antiquated Paris that we love, but the persistent, modern material Paris, carrying on in a time of postmodern immateriality, when everything seems about to dissolve into pixels. We love Paris, not out of “nostalgia” but because we love the look of light on things, rather than the look of light from things, the world reduced to images radiating from screens. Paris was the site of the most commonplace civilization there has ever been: cafés, brasseries, parks, lemons on trays, dappled light on bourgeois boulevards, department stores with skylights, and windows like doors everywhere you look.”

– Adam Gopnik, Paris to the Moon

I’m afraid that there is no way I can possibly put everything I have to say about Paris into one post. It would be terribly long and no one would read it. Blog people like bite-sized reading. And that’s okay! It just means I will write separate posts that each focus on something wonderful to experience in the best city there is.

So let’s just start with the basics!

How to Get There

You’ll probably be flying into one of two airports: Charles de Gaulle (CDG) or Orly. Both have their little quirks, which I figured out flying in and out of them throughout the semester. So I’m gonna help you out and just clue you in, even though it was super fun figuring it out on my own. In French.

This is the main airport in France, so this is where most of you will end up. It’s super nice but also located a bit outside Paris. The best way to get into the city is to walk past all of the people offering you a taxi and follow the signs for the trains.

The Paris RER is five express train lines connecting Paris city center to surrounding suburbs. In Paris, the RER acts as an express underground train that makes fewer stops than the Metro and is, therefore, a faster way to travel to certain places. The RER B goes directly from this airport to the city center–just get off at the stop Châtelet Les Halles. It takes about a half hour.

Living there for a semester, I relied on the unlimited rides on my Navigo Pass when riding the Metro and RER, but that is definitely not necessary if you’re just there for a visit. I would only consider getting one if you’ll be there for a week or more because the card itself costs €5 before you even load it. Most people just buy individual tickets in packs of 10 for €14. Unfortunately, buying a ticket for the RER at the airport costs €10. They up-charge it because they can. But, hey, it’s still much cheaper than a taxi ride, which is usually upwards of €50.

To the few of you who are flying on a smaller airline, you will be touching down in Orly. It’s even farther from the city the CDG, so there’s no train option. There is, however, a bus! It’s called the OrlyBus. And it’s only €9.20. Anyway, it’s a crowded bus ride or a crazy cab ride. The drivers seriously don’t play by anyone’s rules but their own…lanes are a suggestion and the horn is their second language après le français.

The bus comes right to the curb outside Orly Sud at Gate H Platform 4 and Orly Ouest Gate J Level 0 every 8 to 15 minutes, so just walk outside and wait for it to come to you! There’s also a little machine to buy your ticket while you wait. I would recommend getting off at the stop Denfert Rochereau once in Paris because it has the RER and Metro to take you wherever you want to go.

The Metro is everything. Leaving behind this miraculous form of public transportation was one of the hardest things about coming back to America. Take full advantage of it while you’re there, and you’ll get to see as much of Paris as possible in the time you have. Metro stops are everywhere and trains come every 2-5 minutes.

Pickpocketing is definitely a thing, but just be smart and you’ll be fine! I never had a problem with it in all my months living there. Just wear a lot of black and don’t smile— you’ll blend right in. And put your guidebook away. Dorky tourists are pickpockets’ catnip.

Metro when you’re on the go. That said, walk if your destination isn’t that far. Strolling the streets of Paris is one of the best things in this life. Just not if you’re trying to get from the 8th to the 18th.

Were you confused by that last sentence? I would’ve been too before living there. The city of Paris is divided into twenty arrondissements, which is a French word meaning “to go around and around.” This is because the 1st, or première arrondissement, is in the center of the city and the rest spiral out like a snail shell around it. Each one acts as a kind of neighborhood and has its own personality. They are also a super convenient way to navigate the city. Knowing if something is in the 5th or 16th arrondissement is very helpful is figuring out how far away you are and what direction you have to go. You can find out which one you’re in if you look on any of the street signs…or check you’re Snapchat filter if you’re a millennial.

So there’s your basic info for getting to and around Paris! More posts to come about the best things to see, do and eat!