Chiang Mai is the largest city in northern Thailand and draws visitors from all over the world. It’s not hard to see why, considering that the scenery in this temple town is absolutely gorgeous and it also happens to be the foodie capital up north, so the food is to die. So, if you happen to be one of those people who likes eating delicious things in beautiful places, you might want to check this place out.

There are a lot of different options when it comes to spending the day with elephants, but it was really important to me that I chose one that treated the elephants well. And I found one! I had one of the most magical days of my life hanging out with elephants because of Elephants at Home.

They give you a whole day to spend with the elephants and only book small groups to ensure that every two to three people gets their own elephant. They also send a car to pick you up from your hotel in the morning for the two-ish hour drive out to the jungle sight. And you’ll be glad you’re riding with a pro because calling that drive “bumpy” is an understatement.

Once you get out there, a full day of activities is waiting for you. We got to feed the elephants plants and bananas, wash them in the river, go on a hike with them up to a waterfall, and go for a swim at the end of the day to cool off. They also serve a delicious lunch of rice and fresh fruit that you eat in a treehouse on banana leaf plates. And everything left over is a snack for the elephants! They reach up with their trunks to clear it all away—it’s the most fun you’ll ever have doing the dishes.

Oh, and the people who run it are some of the nicest around. They hang out the whole day and take pictures so you don’t have to worry about the Gram. It’s covered.

Remember how I said this was the foodie capital of the north? Well, it goes beyond just eating some of the country’s best food, you also get to cook it! Taking a cooking class when you’re in Chiang Mai is totally a “thing.” All the cool kids do it when they visit, so tie on your apron and start gettin’ fancy with the spices!

The class we took was with Cooking @ Home and I cannot recommend it highly enough. Before getting in the kitchen, the instructor takes you to a local market to buy all of the fresh ingredients needed for the recipes. It’s so helpful to have a local guide you through the overwhelming variety of exotic fruits and vegetables. We also went to a stand where they make fresh coconut milk and cream from actual coconuts right in front of you! You can’t get that kind of quality at Trader Joe’s.

Once you have the ingredients, you head back to the house with a fully equipped outdoor kitchen to cook one of the best meals you’ll ever have. Seriously.

As for the menu, we prepared dtom kha gai (chicken in coconut milk soup), some seriously amazing phad thai with prawns, curry with chicken, and mango with sweet sticky rice for dessert. Oh, and just in case I wasn’t already in enough awe of these culinary masters, they told us the curry paste we used in class is made there from scratch and that the Four Seasons in Chiang Mai buys it to use in their restaurant. Casual.

But whether it’s this class or another one, be sure to get cooking!

This village on the outskirts of Chiang Mai is known for producing handmade umbrellas and parasols. If you go, make sure to walk through the factory, which has a courtyard filled with people hand-crafting colorful umbrellas and painting them, often with intricate floral designs. Fun and very unique spot, so go check out some umbrella-ella-ellas, eh?

A cooking class isn’t the only place your gonna get some good eats in this city. All you have to do is walk outside to find some of the fabulous street food that the city is known for.

There are also some great markets to explore, including Talat Warorot, the city’s oldest and busiest market, and Talat Muang Mai, the city’s wholesale fruit market. Also, try and visit on the weekend if you can because the whole city transforms into an enormous street market for Saturday Walking Street. Get ready to spend some Thai Baht because you’re sure to find something (most-likely elephant-related) you’ll want to bring home!

Elephants aren’t the only wild animals you can get up-close-and-personal with in Chiang Mai—you can hang out with tigers too. And it’s not just a good time…it’s grrrrreat! Sorry, I had to.

We went to Tiger Kingdom, where tigers are raised around humans and are accustomed to having people around them. I got to be inside the habitat with tiger cubs playing with each other and fully-grown cats lounging in the sun. The stripes were cooler up close…the teeth were a little intimidating. It was unreal. 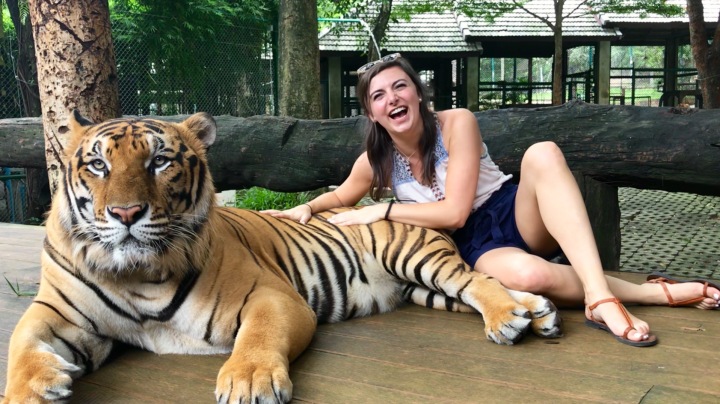 If you’re feeling fancy, this is the hotel for you. Although, it’s not so much a hotel as it is a campus since each party of guests gets their own house and there are golf carts to take you around. Thuper duper schmancy. Like, bakery on-site with fresh macarons at all times schmancy. This was pretty much our splurge for the trip as far as places to stay, and it was fun to feel like Thai royalty, even just for a bit.

I could truly just fill this whole list with temples…they gots lots of wáts (the word for “temple” in Thai, which will quickly become apparent if you visit). With hundreds of Buddhist temples to choose from, it can be a bit overwhelming deciding which ones to visit.

The “big two” are probably Wat Phra Singh with the revered Lion Buddha idol and Wat Phra That Doi Suthep, which is considered Chiang Mai’s signature temple because of its spectacular view. There are many more, so I would just recommend doing research; that way you’ll know wáts wát (ha) and can choose the ones you want to visit most.

This is a day trip worth taking if you’re interested in seeing Wat Rong Khun, better known as The White Temple. It takes about three hours to get there (we took Green Bus), which may seem like a long walk for a short drink of water, but it is honestly worth it. This temple is in a league of its own, which is saying a lot when one is in a country filled to the brim with temples.

One of the many things that makes it unique is that is was not built hundreds of years ago, but was actually completed in 1997. It was also built by an artist, so there are many different symbols and meanings behind the elements of the building. One of my favorite aspects was the large mural on the back wall of the temple, which features Western idols such as Harry Potter, Michael Jackson, Superman, and Hello Kitty in the midst of orange flames and images of terrorist attacks. You can take what you want from it, but I’m pretty sure the message is about humans’ destructive impact on the earth.

There’s so much to see here, but be sure to look up while you’re walking around the temple grounds to see the hundreds of swaying metal ornaments that people write names of loved ones on for luck. There is a Lucky Leaf stand on the premises where you can buy your own for just 10 Baht.

Enjoy this food-obsessed city! And say hey to the elephants for me, okay?