The capital city of Thailand is fast-paced and full of life. The big city vibes are very different than those you’ll find in most parts of the country, but there is definitely a lot to explore in this cultural hub.

The name of this museum may seem like a strange fit for the top of a “Things To Do in Bangkok” list, but I assure you that it deserves the primo spot. This house is truly beautiful, but what makes this place so interesting is the extraordinary story that goes with it.

Jim Thompson was an American architect who moved to Bangkok in 1948 where he helped revitalize the Thai silk industry. There he also developed an appreciation for Southeast Asian art, which was not internationally well-known at that time. He cultivated an extensive art collection and in 1958, he began building what became the pinnacle of his architectural achievement—a house built on a klong (canal) for him to live in and showcase his art collection. He gathered a combination of six traditional Thai-styled houses from places all over Thailand and constructed his vision into existence, which became the museum people visit today.

This man clearly lived an interesting life, and he carried that trait over into his death. Jim Thompson disappeared from Malaysia’s Cameron Highlands in March of 1967. He just went out to take an afternoon stroll and was never heard from again. But his legacy lives on in the beautiful artistic bungalow he left behind, and it will only cost you 200 baht to see.

There is an endless supply of boats drifting up and down the Chao Phraya River, and I definitely suggest hopping on one at some point. The long tail boats are the best option if you really want to get a glimpse of the variety of life in the city because they take you down the main stretch lined with high-rises and hotels (look for Wat Arun in the skyline) and then through some of the little canals, most of which are lined with wooden shacks. There’s really no better way to explore the city on a broad scale.

There is no shortage of Buddha statues in Bangkok, but this is one you’ve gotta see. The Reclining Buddha is 50 feet tall and 150 meters long…basically, it’s big. The whole statue is covered in gold leaf apart from the bottom of the feet, which are black with intricate mother of pearl designs. There’s really no picture that can capture it, so I’m not even going to try. You’ve just got to go see it for yourself!

This is something you won’t soon forget—you Buddha believe it.

This is honestly one of those places that you should definitely see, but will probably not enjoy seeing. It’s a tourist anthill with a dress code, so make sure that you wear pants or a long skirt (legs covered) or and a shirt with sleeves (shoulders covered). Keep in mind that wearing pants in an already-warm place surrounded by crowds of people will get very hot, so be sure to drink lots of water. Seriously, I was sweating through my linen.

In all fairness, there are crowds for a reason. This famous landmark was the home of the Thai King for 150 years and he lived in style. The palace has beautiful buildings with so many intricate details that you will never run out of things to look at. Colors and crazy shapes everywhere, Thai architecture is just a lot of fun, and this is one of the best places to experience it. 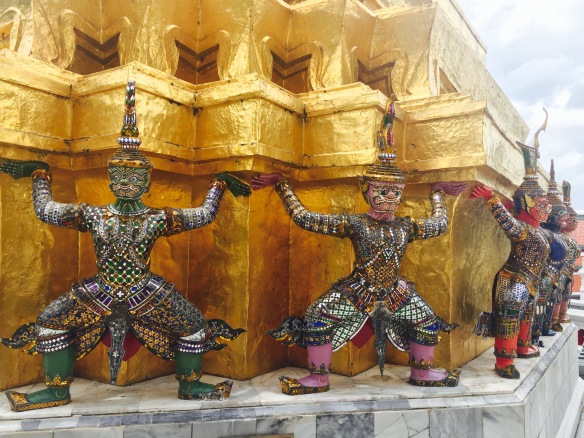 Within the grounds of the Grand Palace is what is regarded as the most important Buddhist temple in Thailand—Wat Phra Kaew, or the Temple of the Emerald Buddha. The revered Buddha is carved from a single block of jade and is actually a lot smaller than you would think for being housed in such a grand building. This is definitely worth seeing, so make sure to keep an eye out for the little guy!

When you want to go someplace close by, the best and cheapest way to get there is by tuk-tuk. These little three-wheelers are basically rickshaws with engines and have become the city’s most recognizable form of transportation. They are truthfully more of an experience than a practical way to get around, but you can ride in a taxi anywhere, so what’s the fun in that?

With over 8,000 stalls, this is one of the largest markets in the world so I wouldn’t check it out unless you like shopping. It’s open every Saturday and Sunday and most things you’ll find are being sold at local prices rather than tourist prices. There are also street food vendors and massage places scattered throughout, so it’s an all-around treat for the senses! This place has snacks galore, but if I could make one recommendation, it would be the coconut ice cream—just look for the green umbrellas.

This isn’t so much a museum as it is a large boathouse because it is where the ornate boats from the Royal Barge Procession are kept. Tucked away just inside a canal across the river from the Grand Palace, it’s a bit off the beaten path. I wouldn’t say that this is a must see, but it’s a pretty quick stop if you’re interested and since it’s right on the river, it’s a good launch point to take that boat ride I mentioned.

This is a beautiful spot to have dinner after a day exploring The Big Mango. The hotel is lovely and the food is delicious, but what really makes this dining experience dreamy is that it’s right on the river with a light-covered boat used to ferry people across. So put on your fancy pants and head on over!

Enjoy this Buddah-ful city! And don’t forget to stay hydrated—it’ll get toasty out there.